Certainly the Orphanage, the oldest of all police charities, constituted the first official act of compassion towards the dependent children of deceased policemen. But unofficially it was not the first. The Home for Destitute Orphans of Police at Brighton was already in being. Privately owned, it relied on subscriptions from within and outside the Police Service. In 1870, of 28 children accommodated in the Home, 17 were from the London area.

Alarmed at the prospects of losing its revenue from police subscribers in London, the proprietors wrote to the Commissioner,

"...It was an orphan of the Metropolitan Police, found in great distress, that was the origin, under God, of this work for police orphans being contemplated.."

The letter pleaded for compensation to be kindly considered so that

"...it cannot be said that a new Orphanage was founded at the expense of the original one."

The fate of the Home, which had existed for at least five years, is not known.

The Metropolitan Police Orphanage opens in 1870

Established on 1st January, 1870 the Metropolitan Police Orphanage opened in October of the same year with 20 children. In 1871 it was renamed to include the City of London Police and granted Royal Patronage the same year.

Its original home was Fortescue House, London Road, Twickenham (long since demolished) the former home of Earl Fortescue. Admission was confined to children orphaned after 1st January, 1870 and limited to two from each family. But, because the number of orphaned children rose rapidly, Bath

House, London Road, (opposite Fortescue House and since demolished) was taken on lease to accommodate 40 of the younger children. Yet this was not enough. Within three years there were 115 orphans eligible for accommodation. In 1874 Wellesley House, Hampton Road, Twickenham, was purchased. 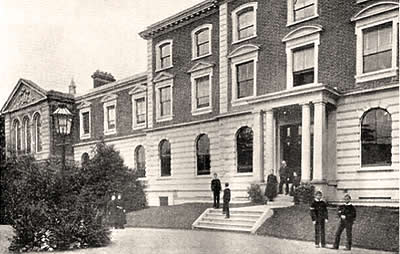 This is now known as Fortescue House School for Boys where from 1855 to 1858 Richard Doddridge Blackmore, the author of Lorna Doone, was the classics master. With accommodation for 200 children, later extended to house a further 60, Wellesley House was occupied on 25th September, 1874 where the Orphanage was to remain for the next 63 years.

During the 67 years of its existence 2,807 boys and girls passed through the Institution as it became known under the rules.

By 1878, however, there were 1,000 orphaned children only 200 of who could be given Orphanage accommodation. It was clear the Institution could not fulfil its purpose and a new dimension was necessary. Thus, in 1883 a compassionate allowance at the rate of £2 12s.0d per child per annum became payable for children for whom there was no accommodation, and between that year and 31st December 1969 £1,369,320 has been paid to 5,243 widows in respect of 10,728 orphaned children. So in the course of 100 years benefit in kind or in cash has been bestowed on 13,535 children. But this new dimension demanded increased income.

Introduction The Financial And The War Memorial Hospital