Was the Orphanage a success? Undoubtedly, although it was never able, even when enlarged, to accommodate more than one-third of all eligible children. In 1921 the minimum rate of subscription for Constables and Sergeants (there were higher rates for ranks above) which had remained at one penny per week from 1871 was increased to three pence weekly. But this did little more than prevent recurring deficits of previous years.

The Police Pensions Act of 1921, which gave the widow of a Constable or Sergeant who died after completing five years service a pension of £30 per annum with an allowance of £10 for each child up to a maximum of £30, probably hastened the closure of the Institution. Certainly it provided an incentive for all but the very poor widows to keep their children at home, and in 1933 out of 650 orphans only 277 were in the Institution. In 1934 it was 181 and at 31st December, 1936 there were 114 children in the Orphanage and 406 outside receiving compassionate allowance at the rate of £20 per child per annum.

The Metropolitan and City Police Orphans Fund is formed in 1937

In 1934 the Branch Boards in the two Forces approached the Trustees of the charity asking that the Institution be closed. The Trustees agreed providing it was the wish of a two-third majority in the two Forces. The majority was not forthcoming but by 1936 the position had become worse and the Trustees, with the approval of the Charity Commissioners, closed the Institution on 31st July, 1937. On the following day the Metropolitan and City Police Orphans Fund came into being. Staff at The Metropolitan and City Police Orphanage

By 1942 the newly styled Board of Management had in three years raised the annual rate of compassionate allowance from £20 to £48 per child, although with 326 children coming into benefit as a result of the war it was destined to remain at this level until 1952 when it was increased to £52.

Since that time there have been small increases whenever possible, and, following a further increase in the minimum rate of police subscriptions from three pence to five pence weekly from January 1963, the allowance has gradually been increased to £168 per child per annum, the amount payable at 31st December, 1969. During 1969 a total of 357 children received benefit and at 1st January, 1970, 303 children were in receipt of monthly allowances. 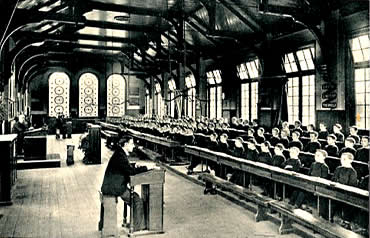